​Voting is on the minds of over 50 faith leaders who are part of the new Faith Leaders’ Coalition of Greater Houston. Dozens of leaders and supporters stood outside Houston City Hall on the first day of early voting to urge citizens to vote. “We are faith leaders of greater Houston, and we urge every citizen to vote. We are speaking out as early voting begins on Oct. 24th because we want the world to know that there are religious leaders in Houston who are willing to challeng 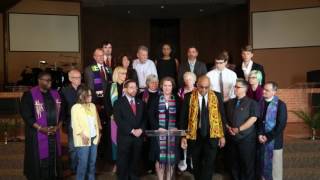